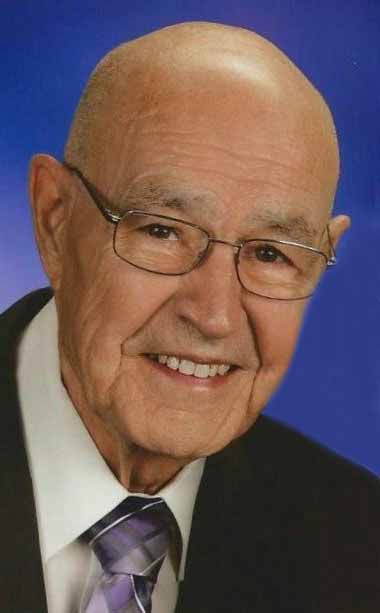 Arden D. Strole, age 85; beloved husband, father, grandfather, great-grandfather, friend, retired banker and caretaker of many through Downing & Lahey died Sept. 9, 2019. Arden was born in Abilene, KS on May 31, 1934 to Dale and Delia Strole. In 2015 Arden expanded his family through marriage to Mary Magnison and added to his treasure of people who loved him. He is survived by Mary; Peggy (Phil) Baldwin and Dennis (Sallie) Strole, Wichita. Grand-children Kristin (Mike) Marlett, Brian Strole, Wichita; Megan (Zach) Jones, Durango, CO, Erin (Rob) Koehn, Wichita and 4 great-grandchildren, Oliver and Elliott Marlett, Abigail Strole all of Wichita and Bodhi Jones, Durango, CO. Bodhi bears the distinction of sharing his birthday with his great-grandpa.
Arden was a faithful and devoted son to his parents as well as his aunts and uncles, all his life. He acquired the values of hard work, ethical living and a deep faith in God which he lived out every single day. He grew up on the farm outside Hope, KS. He attended schools there and in his first year of high school met Carol Bielefeld. He always said they were married 61 years, but were together 65. They married in 1953, moved to Wichita, and raised 2 children, Peggy and Dennis. His first job in Wichita was at Gambles, located in the Indian Hills shopping center. He later became a milkman for Meadow Gold, delivering milk to homes and businesses in the wee hours of the morning. He sold insurance for several years and in 1966 changed careers and started as a teller at National Bank of Wichita (now Emprise Bank). He was a loan officer, a collector and eventually landed in purchasing where he was responsible for all the supplies and the Wichita facilities. Arden and Carol were very involved in the Double Ring Sunday School Class at First United Methodist Church for more than 50 years. They developed and nurtured many life-long friendships which remain today. In 1979-80, along with Julia Wilke and Lois Jordan, they dedicated a year to get the first married/singles class started at the church. Today, Pneuma is a thriving, involved class of leaders that will celebrate its 40th anniversary later this month. After retiring Arden spent many hours working throughout the church. He was active in the Optimist Club for many years and was a founding member of the Far West Wichita Optimist. They were very involved with the Walk to Emmaus and he continued to participate in fellowship with those he met through that group.
The essence of Arden was giving of himself. He always made time to help others and didn’t mind doing “what needed to be done”, even if that meant dirty or time consuming tasks. He was always helping and he most always wore a smile. He was a good friend and kept up with relationships. His address book is filled with current contact information for his friends, some he has known his entire life.
Arden was a blood donor; in his lifetime he gave over 100 pints to the Red Cross, going, in part, for the sloppy joe meal afterward. The joke was to be careful if he invited you to lunch, because on occasion, unbeknownst to them, he took people to the Red Cross to donate. For many years, Dennis, Peggy and Arden donated at the same time and took the opportunity to spend time together over lunch.
Between his work at the bank, the church and his extracurricular activities it seemed he knew most everyone. The grandkids would say they couldn’t go anywhere without someone stopping to talk to grandpa. No matter where you might be, there was someone he knew, even when he was out of town.
Arden was first diagnosed with non-Hodgkins lymphoma in 2000 and fought through five recurrences, the most recent earlier this year. The care of everyone at the Cancer Center of Kansas is deeply appreciated.
Arden retired from banking in 1997 and found a 2nd career caring for people through his work at Downing & Lahey Mortuary, where he has the current distinction of being the longest term part-time employee at 22 years. He loved this work and his goal since April was to return there.
In 2015 he married Mary Magnison. They enjoyed participation in their small group at Asbury UMC, traveling, making new friends and sharing with existing friends.
He loved his family with a passion; always wanted to know who was doing what and was so proud of who they are and of all their accomplishments. He also loved ice cream.
He will be missed every single day.
He was preceded in death by his parents, his wife Carol and brothers-in-law Earl Bielefeld and Frank Clobes.
Visitation Fri. 6-8 at Downing West. Service Saturday, Sept. 14 at Asbury UMC, 2801 W. 15th in Wichita. Burial to follow in Navarre Cemetery, Navarre, KS. Memorials to Victory in the Valley.

Your name will appear next to the candle you light.
Your condolence may need to be approved before it appears on this page. It may not appear immediately once submitted.

To leave a condolence, you can first sign into Facebook or fill out the below form with your name and email.